When a user creates an idea, this idea is privat. The process is divided into two parts. See more at BG:Idea_Creation-01 (idea creation).

Q: Do you want a online payment system to be integrated in the system?
A: yes, specifications are longer down

Q: Or when the idea owner clicks to upgrade the idea to be LISTED or PUBLIC, a request mail is sent to the system admin and on receiving money from the idea owner(by check or cash or any other way) upgrades the idea status to the requested state.
A: we will allow that option only for "listed" (=25000 NOK) or "listed&noted" (=27500 NOK), were we will create an Invoice (not clear who is doing it) and then perform a manual update of the status.

as from the email from Gunnar Here is how Codewise would like to implement the payment process:

1. When a user (on movation.no) wants to «purchase» the Movation site collects necessary information from the user (amount, user details, redirect page for payment-went-ok and redirect page for payment-failed) and call our service to initiate payment
2. We will open the NETS payment screen where the user will have the option to select payment method (card, invoice).
3. The user will either succeed with the payment or fail (e.g. cancel payment, invalid card.. etc)
4. We will receive success or fail from NETS and store the transaction in a database, send an e-mail to one or more people at Movation and redirect the user to one of the two pages we received initially.

We are going to have four different services to be paid for:

A person can register and edit an idea private for free, but if he want to go public with the idea then he have to pay (Public: NOK 2.500). After going public the person can then choose to do a scoring (consult meeting) and pay for showing up the scoring value in InnoBors (Listed: NO 25.000).

We are going to implement two method of Payments; Card (VISA/MasterCard) and Invoice 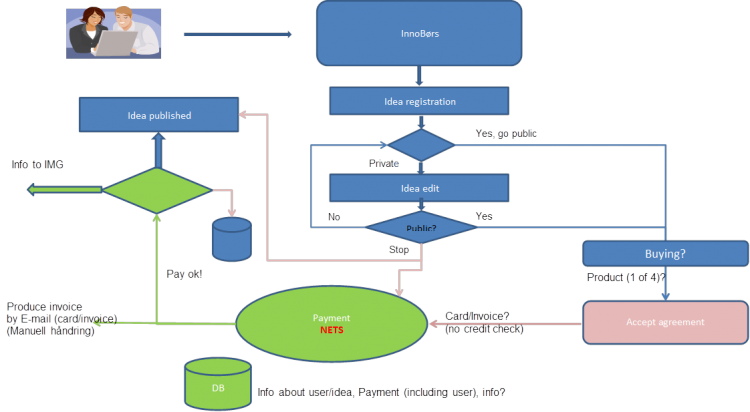